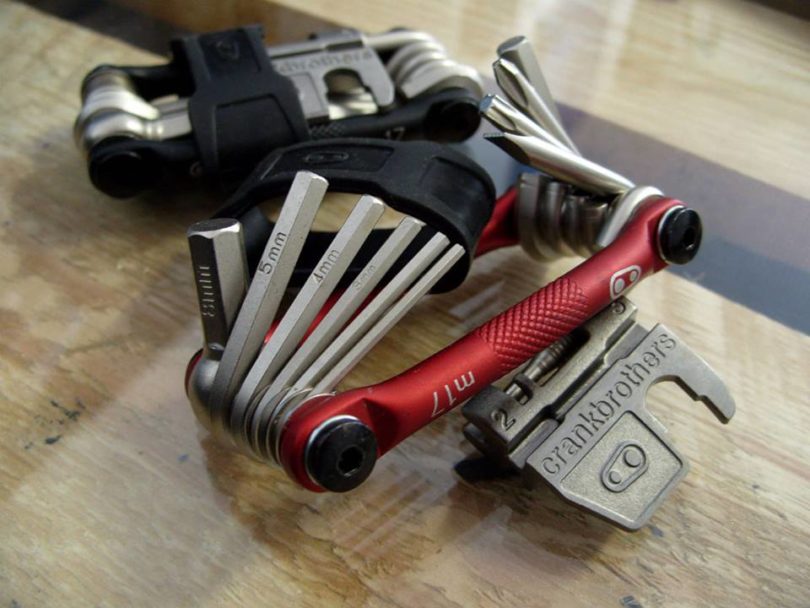 We’ve all been there. You’re half way to work, or out in the middle of the country and your chain breaks, a spoke pops or your tyre goes flat.

As we compare the Crank Brothers M17 vs M19 bare in mind, these kits will stop you being stranded when you most need the help. 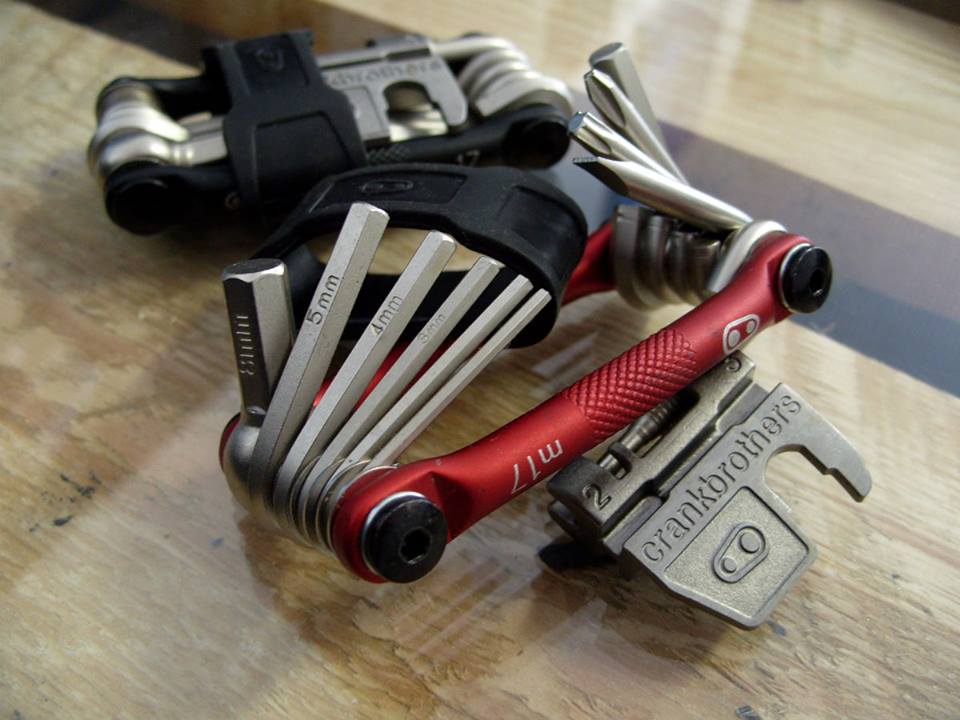 If you don't have time to read the review here's a quick wrap up. Personally, I don't need the extra tools or hard case the M19 comes with. Therefore, the M17 is good enough for me. 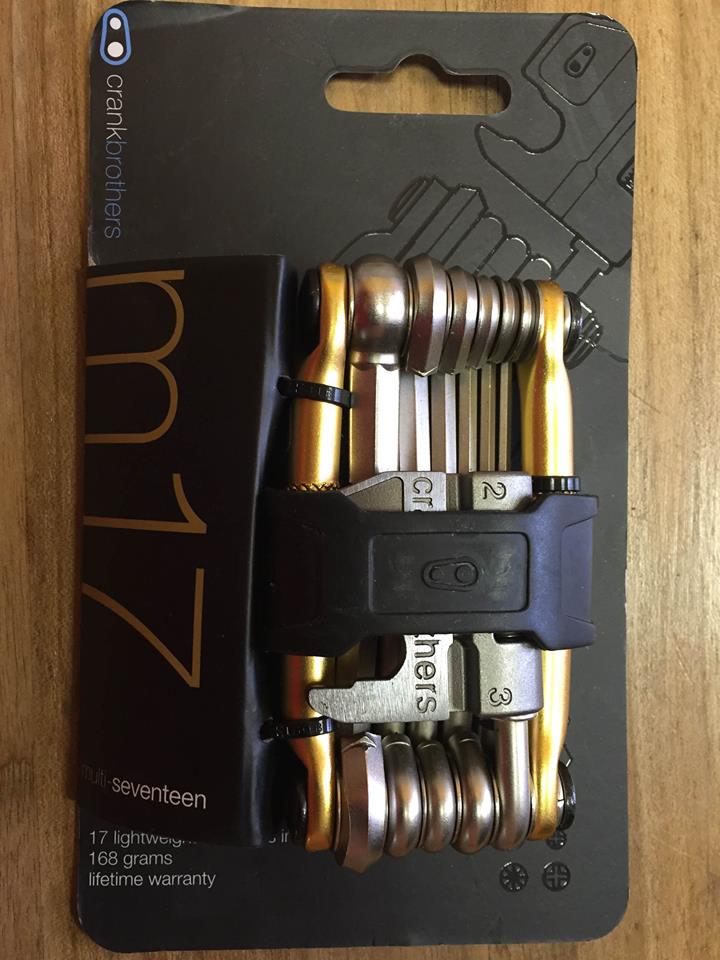 The Crank Brothers are a relatively new business in the world of cycling.

They were founded in 1997 by two friends who enjoyed the sweet spot between engineering and design, as well as loving the world of cycling.​

Essentially they come up with solutions they spot. One of their first creations was a tyre lever, but they became most well known for the Eggbeater.

The Eggbeater is a pedal that many people loved and some people hated. If you ask the founders, they say it's because they build solutions to problems. Some people don't have the problem so they don't like the solution and prefer things as they were.​

This philosophy of solving problems leads us nicely to the M17. They found that most conventional travel tool kits often missed a key component.

They included a chain tool with mountain bikers in mind, knowing that this form of cycling can often be rough and cause a break in the chain link.

Without the tools to fix your chain you're left to carry your bike over uneven terrain. 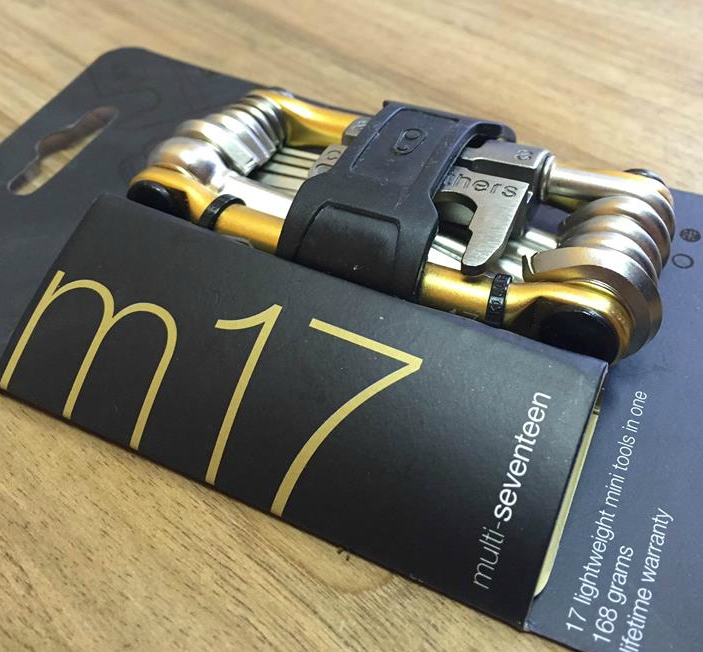 Unlike the M19, the M17 doesn't include an additional Phillips head screwdriver, (It only has 1) or an extra Torx screw.

There is also a lack of trust in the durability of the M17 multi tool, and it doesn't provide the very nice looking hard case that the M19 does​.

Related Post  Road Bike Cassette Sizes For Climbing: How Do You Choose? 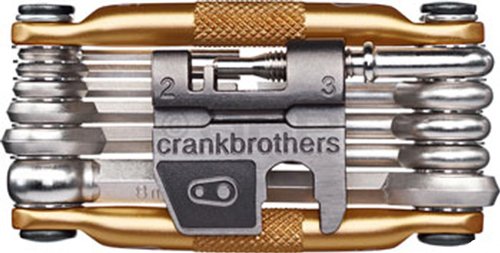 Elizabeth obviously loves the M17 multi tool. She finds it light enough to carry very easily, either in a saddle bag or a backpack.

Although it doesn't have its own case she has no problem wrapping it up using the rubber strap that it does come with.

It's good to note that she specifically mentions wanting a tool kit she can take on the trail with her. This fit the bill nicely. Elizabeth goes on to let us know that she has used this tool multiple times. She's taken it on long day trips and has just tinkered with it at home.

As a bonus, she's happier it came with a choice of colours as well.

Click Here To Check The M17's Current Pricing ﻿And﻿ Availability​

With a history of solving problems, it’s my guess that the Crank Brothers designed the M19 for people that had maybe damaged their tools while travelling or found themselves short of a specific type of tool.

This is because the M19, unlike the M17, comes with its own sleek looking, hard case to protect the multi tool.​

The price of the M19 is quite a bit higher, which is very unusual considering the only extra tools it comes with are another Phillips head screwdriver and a Torx screw.

These products together shouldn’t cost that much, but when combined with the hard case you’re might be getting what you pay for.

The additional Phillips and Torx probably holds the touring cyclist in good stead, where wear and tear are much more likely to play a factor. It may not be as important for your average commuter, or even road cyclists who are not as hard on the chain.

Keeping the tools in a nice case when biking in places with plenty of dust and incremental weather is sure to also be a factor when considering whether to buy this product.​ 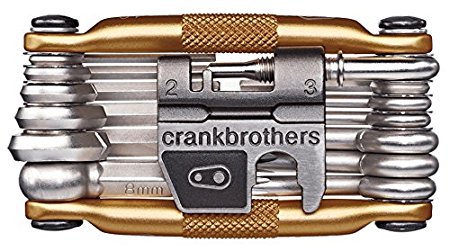 Aaron tells us exactly what we want to hear. He’s taken this tool set on on over 4000 miles of touring.

He commutes daily with the tool set in case of emergencies, and he's even rebuilt a whole wheel using just the M19.

Related Post  Most Comfortable Bike Seat In The World: A Guide On How To Find It

That's pretty impressive and probably assuages any hesitation for the extra money spent on this product.

What's more, he's also used the set for assembling furniture. He does highlight the one weakness that occasionally comes up when talking about the M19.

Some people have issues fixing the chain links. Aaron explains a simple solution which is unscrewing the tool from its pin and using an O ring to push past the threads.

He also sometimes trades out the M19 for a lighter tool case when he doesn't think the extra tools will be necessary.

Click Here To Check The M19's ﻿Current﻿ Pricing And Availability​

If you have a higher speed bike, the chain link tool may not work quite as well, but anywhere south of a 15 speed should be fine.

If you’re rarely going to bike outside of your city then there are other options for you, but any mountain bike enthusiast, touring cyclist or avid trail fan should stick with an M19.​

Some Things To Look Out For

Firstly, check your bike to see if you have Hex screws or Torx screws. The Torx screw is a six pointed star system. When all's said and done it is much less likely to strip the screw.

This is because the weight distributes differently with the six pointed star shape. Which leads to the second interesting feature.

The Torx screw doesn't have to be as high, so the top doesn't protrude as much as your traditional Phillips after it’s been screwed in.

You won't need this immediately if you own a bike with the traditional Phillips shaped screws, but you might in the future. Unless you can be sure to never ride a bike with a Torx screw then this is well worth the inclusion in the M19.

The tough case basically keeps your multi tool safe and sound away from dust, weather and human interaction that could foreseeably harm the tool. It is kept relatively compact and is not a feature that adds a huge increase in weight.

If you're carrying a backpack with a lunch or something else inside it then you will hardly feel the increase at all.​

It will make your tools look more professional and that matters to most.

The Crank Brothers chain tool is compatible with chains that have 8,9 and 10 gears. Although its use can be adapted, this is important to bear in mind.

The size of the chain breaking tool can be problematic due to the force needed to break the chain. In an ideal situation it would be larger, but then you wouldn't be able to carry it around with you.

To use it you put the chain on the slot necessary, then line up the pin and hit it with as much effort as you can.​

If you're thinking of getting a new chain check out my KMC review - here​.

To see a Crankbrothers M19 in action check out the video by Kenfl74 below. (and here's a video of the M17 as well).

This is a solution for those who need a multi tool kit that is just as durable as anything the Crank Brothers can make, but not quite as heavy because it doesn't include as many items.

If you're a city commuter and are mainly dealing with the potential of tightening up your seat or handlebars then this is probably the best buy for you.

It's not going to break and it should be rust proof. Please bear in mind though, that it does not include a spoke wrench which means if your spokes break you have no easy solution.

The one thing this kit has which the Crank Brothers do not is a glueless puncture repair kit. While these are very light weight and easy to carry in a pocket, it's nice to have a multi tool kit that doesn't take that for granted.

Judging by how many patches are included in the Vibrelli multi tool it can probably fix multiple puncture issues as well.

If you're prone to punctures, maybe because you're using older tyres and aren't able to replace them yet then maybe this is a better option than an M19 or 17.

Tool Kits Are A Necessity

For any cyclist, whether a commuter or a professional a tool kit is not really optional.

It’s something you will need at some point or another. Whether it’s the Crank Brothers or another company doesn’t matter - what does matter is that you buy a tool kit which will meet your needs in an emergency.

Personally, I’m not a mechanic, and although I do like my tools in one place I don’t need another hard case, so the M17 is good enough for me.​