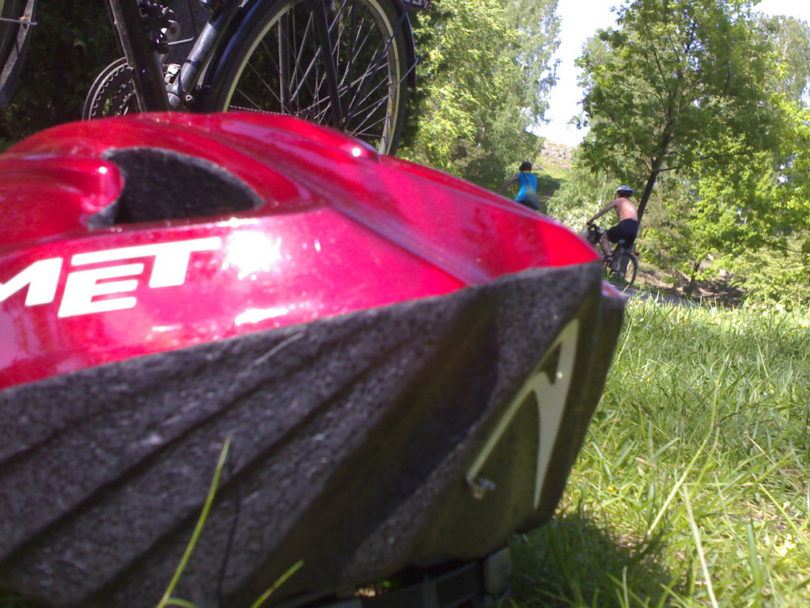 Are cyclists in the UK required by law to don a helmet before riding?

There is, fortunately, a black and white answer to this.

But there’s also a whole lot of muddy grey area, in which the debates and heated opinions fly freely. 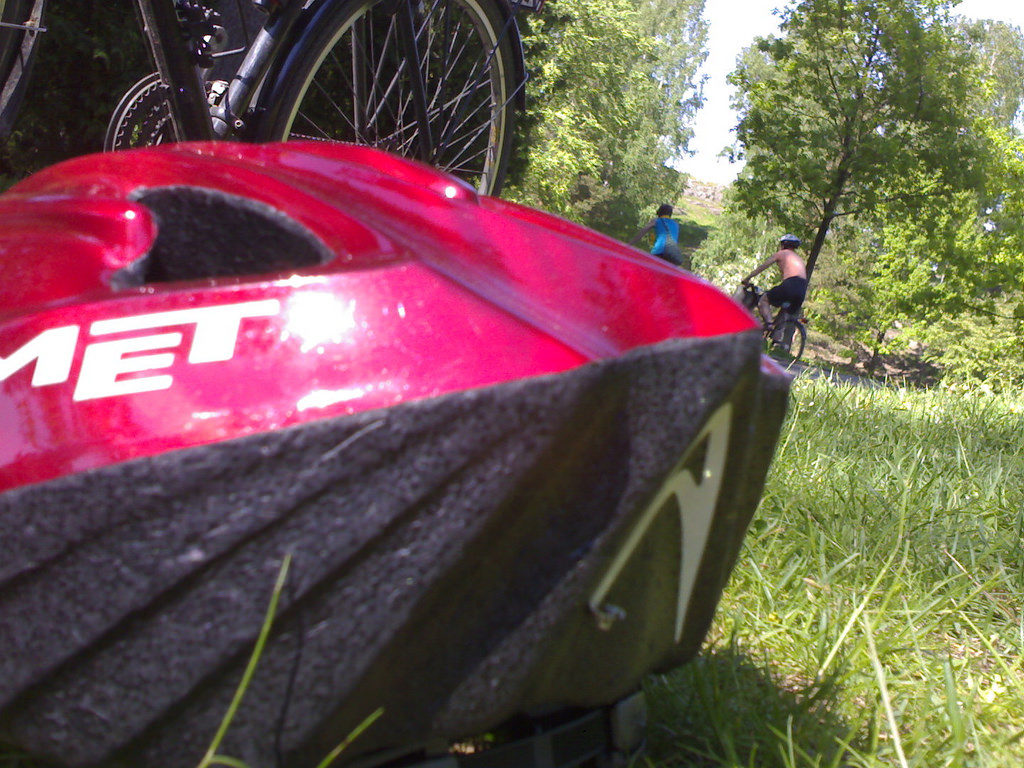 According to the written law – no, UK riders are not compelled to wear helmets and will therefore face no penalty for not wearing one, should they choose to go that route.

So that answers the question - "do cyclists have to wear helmets?"...Case closed, right?

Well, not really. Whilst you won’t get in any legal trouble for leaving the helmet at home – there are still plenty of dangers waiting for you outside of the courtroom.

Though not enforceable by law, the Highway Code is a clear guide for anyone looking to use the roads and highways to get around – including cyclists.

Under Rule 59, the code outlines how a road cyclist should dress (bright, fluorescent clothing even in the daytime), the state their bike should be in (working brakes, tires in good condition), and how they should protect themselves in the case of an unforeseeable accident. It states:

“You should wear… a cycle helmet which conforms to current regulations, is the correct size and securely fastened.” [1]

I've written about my favourite helmets under $100 - here.

Again, you’re not going to be pulled over by an angry police officer who will proceed to wave a copy of the Highway Code in your face – but these rules can still be used in legal cases to establish liability.

Keep this is mind when weighing up the risks of whether to protect your noggin. 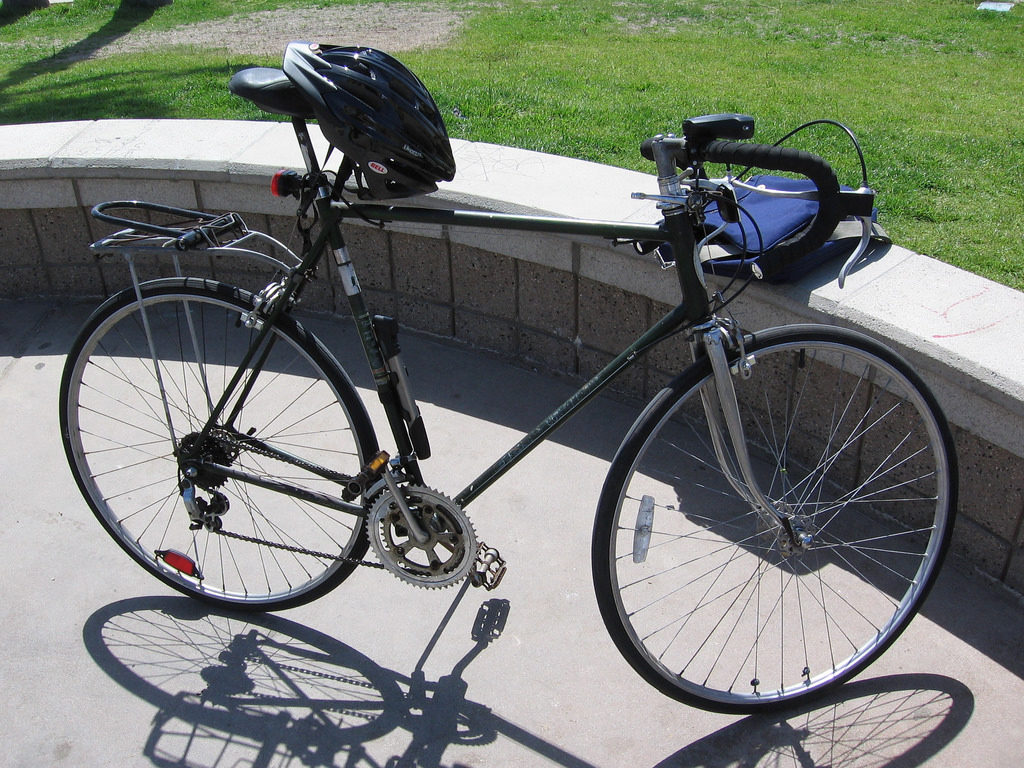 What the studies say

Here’s where we enter that grey area mentioned earlier. Various controlled studies have been conducted around the use of cycle helmets – for example, one study found that, when simply looking at the effectiveness of the helmet during an accident, there was up to an 88% reduction of head and brain injury upon impact. [2]

Related Post  A Pub Bike: Yup, It's Something EVERYONE Should Have

So, if you fall off whilst riding, a helmet will probably leave you better off and decrease your risk of significant injury. That’s pretty much a no-brainer (if you’ll excuse the pun).

The criticism of these kinds of statistics mainly revolve around the notion that, ultimately, cycling accidents are rare and largely depend on many variable factors – including the skill and cautiousness of the rider, the area they ride in, and the degree of traffic in that area.

In other words, it’s argued that studies around this topic are hard to be taken seriously due to the number of variables. It’s believed that cyclists who opt to wear a helmet will, on average, also likely be more cautious in nature compared to those who don’t – meaning they will avoid more accidents in general anyway. Makes sense, right?

Well, to muddy the grey area further, studies have also found that helmet-wearers can be more likely to be involved in accidents on the road, due to something called risk compensation.[3]

Basically, this means that a cyclist with a helmet may be more likely to speed unnecessarily and take more risks, resulting in more injuries. Should I try to beat that red light? Well, I’ve got a helmet – what have I got to lose?

This is anecdotally evidenced in certain areas of Europe – such as Amsterdam, for example, where cycling culture heavily outweighs any other form of transport and helmets are very rarely seen, even on the heads of moped riders.

Take a walk through Amsterdam, or any city in the Netherlands really, and you’ll very rarely see anything close to an accident (other than spaced-out tourists walking into traffic).

Related Post  Today It’s The Brooks B15 Against The B17: Who Wins?

That’s because the cultural climate encourages a much safer way of riding: slow but steady, never speeding but never stopping, and making good use of the many dedicated cycle lanes and roads. Thus, helmets aren’t really needed.

Here's some more interesting thoughts below by TEDx on why we should NOT wear helmets.

In places like the UK, however, where drivers and cyclists seem to always be at odds and there is comparatively very little dedicated space for bike riders, it’s a different story.

So, again, your use of a helmet depends heavily on a number of factors, your location being a main one.

A big story that broke out around this issue was when Olympian cyclist Chris Boardman rode out in traffic without a helmet – ironically, during a BBC segment based around how to cycle safely in urban areas.

Some disgruntled, snobbish types arguing on social media are one thing, but when an Olympian medallist chimes in – well, you have to assume the guy knows his stuff.

When speaking back against the outrage he conjured up, he said: “It's a very long answer and more time than we've got here, but it discourages people from riding a bike. You are as safe riding a bike as you are walking.”

Boardman doesn’t completely dismiss the merits of wearing a helmet, but rather defended his own choice not to equip one. He even went on to back up our earlier point about the cycling culture in the Netherlands:

“I want bikes to be for normal people in normal clothes. About 0.5 per cent of people wear helmets in the Netherlands and yet it's the safest country in the world and there's a reason for that.”

Anyone who’s visited the Netherlands will know this to be true; plain-clothes cyclists are literally everywhere, many in their work outfits, suits, dresses, shorts – but very few kitted out in the fluorescent, skin-tight cycling gear you so commonly see in the UK.

So, culture comes into play when considering your use of a helmet. In 2015, it was found that only 3% of adults over the age of 18 cycle every day as part of their normal routine.[4]

Outspoken enthusiasts like Boardman would love to see this number greatly heightened, and for a shift in the UK cycling culture to occur so that bike riders are much more accepted on the roads. We tend to agree.

Until such a shift occurs, however, decisions on your own safety have to be taken seriously. We’re still a good distance away from how folks in the Netherlands do things – and, until we get there, it’s important to keep in mind your own safety and wellbeing based upon your own situation.

Whatever you decide, ride smart and ride safe, and consider getting out there and encouraging people in your local community to swap their steering wheels for a good set of handlebars. Maybe then the need for helmets won’t be so high.