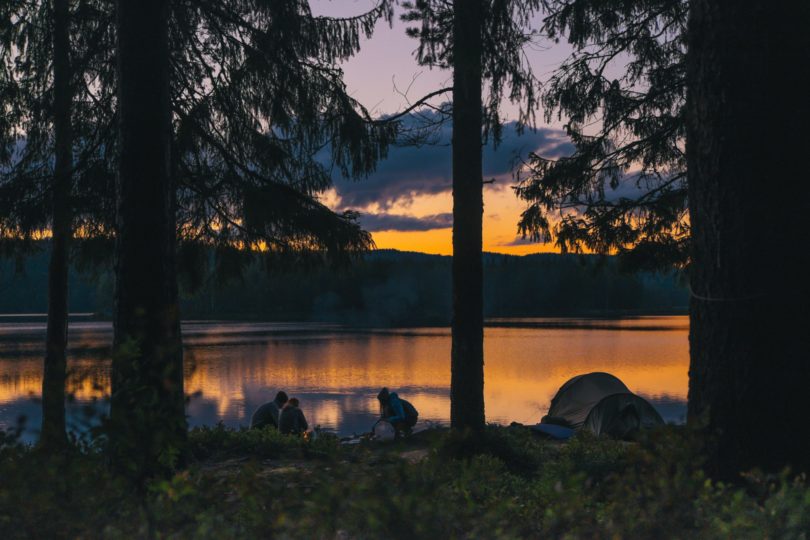 Hang on, before you decide to paint your face green and start commando rolling everywhere. 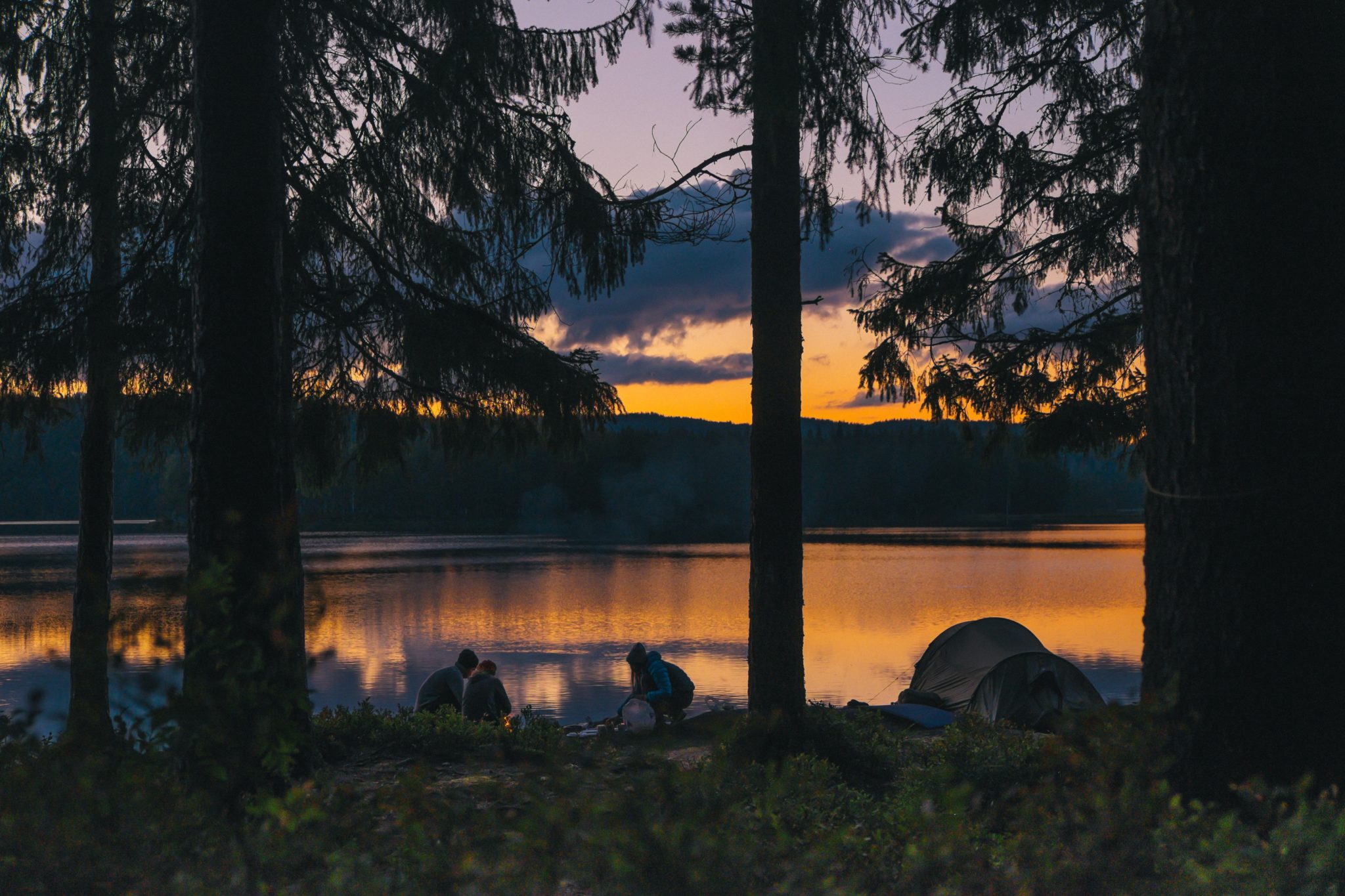 The only thing you'll ever have to worry about is that weird car. The one that parks up where you stop and stares at you as you look for a place to camp.

Definitely, worry about them.

Nah, just kidding. It's the bears, all you need to worry about is the Bears. 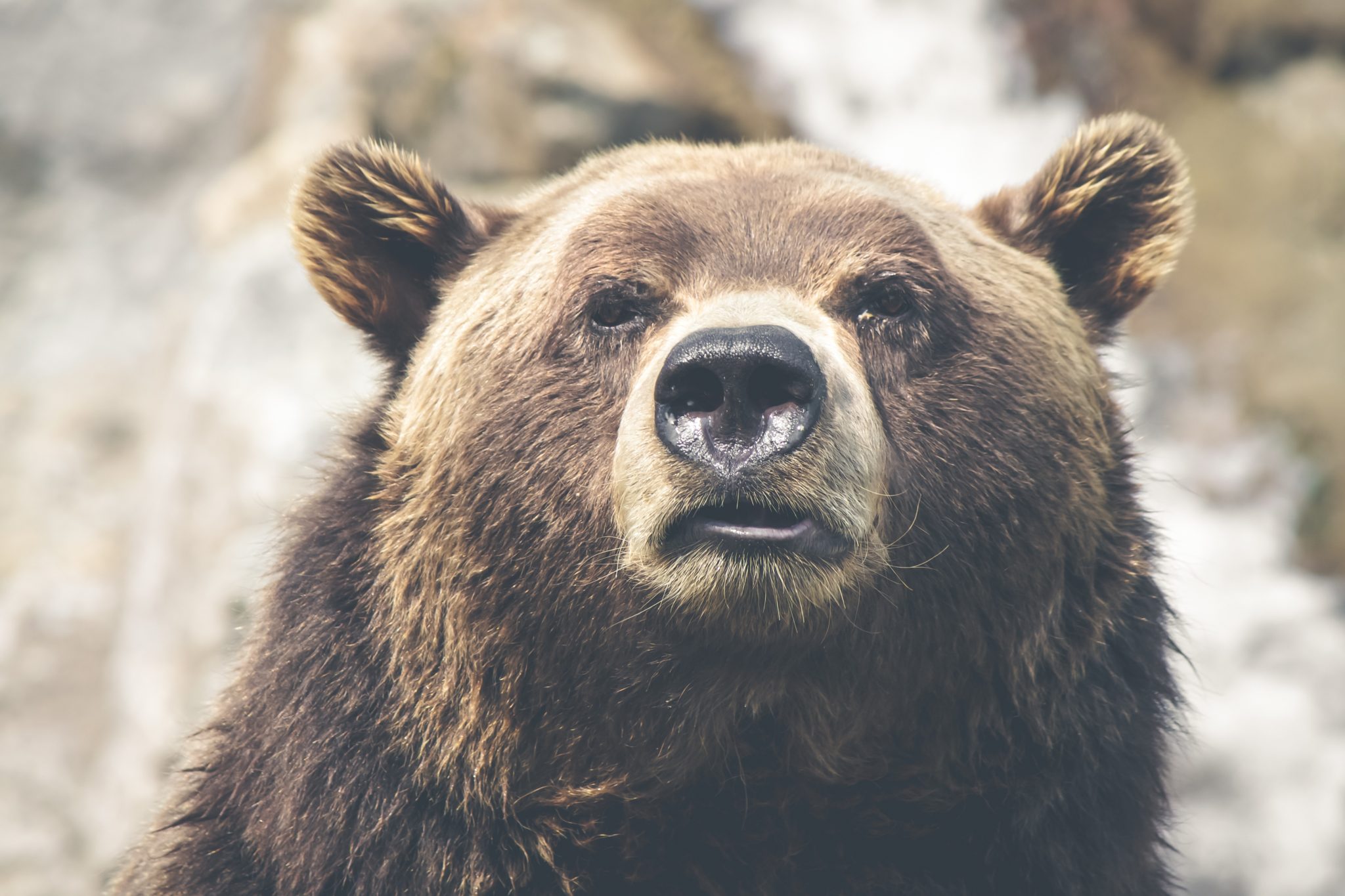 I hope to make this the best resource around for free camping, so please feel free to submit your tips and stories in the comment section below.

Getting permission to camp on private property is easier than you think.

While cycling through Europe I would often ask to camp in someone's garden only to be invited in for food and drink.

Churches, temples and police stations are viable options. If not they'll point you in the right direction.

I recently met a cyclist that used temples for the majority of his trip through SE Asia. He said that they let you use their showers and some even have wifi.

These ﻿﻿guys have camped pretty much everywhere, and some of them are in seriously cool places!

If there's no one to ask. Great! It makes secret camping a whole lot easier. 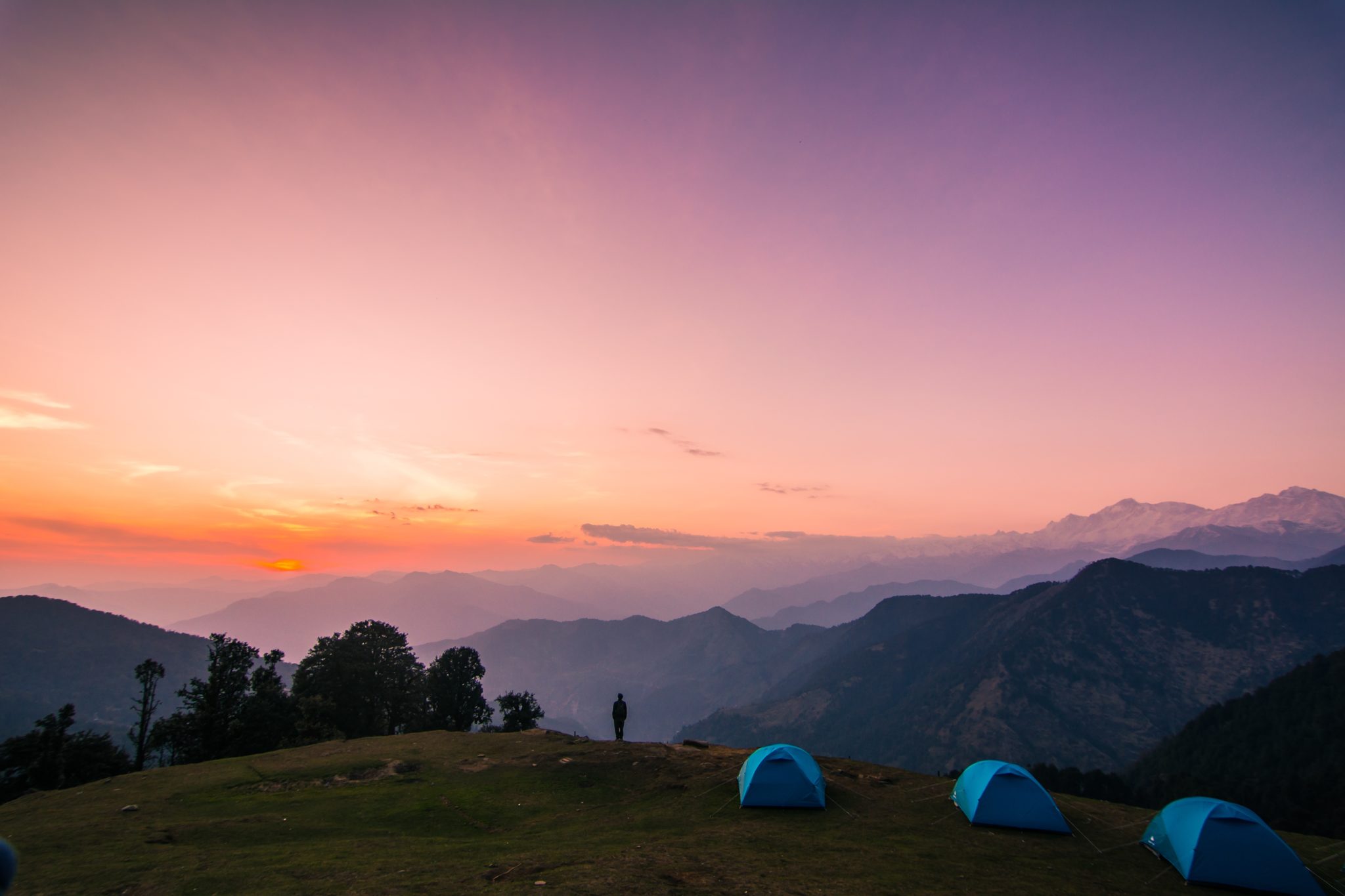 Be careful about camping next to a road. Minimum maintenance roads are sometimes "party spots" for the locals. If you're unlucky, you could wake up to more than you'd bargained for.

If you must camp by the side of a road, do so on a bend or corner. Your camp won't be illuminated by vehicle headlights as they shine more to the outside of the bend.

There's nothing like getting yourself lost before breakfast to ruin what could have been a good day on the road.

If you're unsure about the area you're in, look out for "No Trespassing" signs. Purple﻿﻿ paint on fence posts or trees is another common and legal way to mark private land.

Most cities have a public park that will provide you with some good cover. Just make sure they don't have a sprinkler system!

In Bike Tripping﻿ by Tom Cuthbertson, he mentions sleeping in cemeteries. People rarely visit them at night, so they make an excellent place to set up.

Although, in the words of someone from the bike touring forum

"anyone who you do meet in a graveyard is almost guaranteed to be a psycho."

Beware of countries with landmines, animal traps and quicksand. For a great article on general safety while on a cycle tour click here. 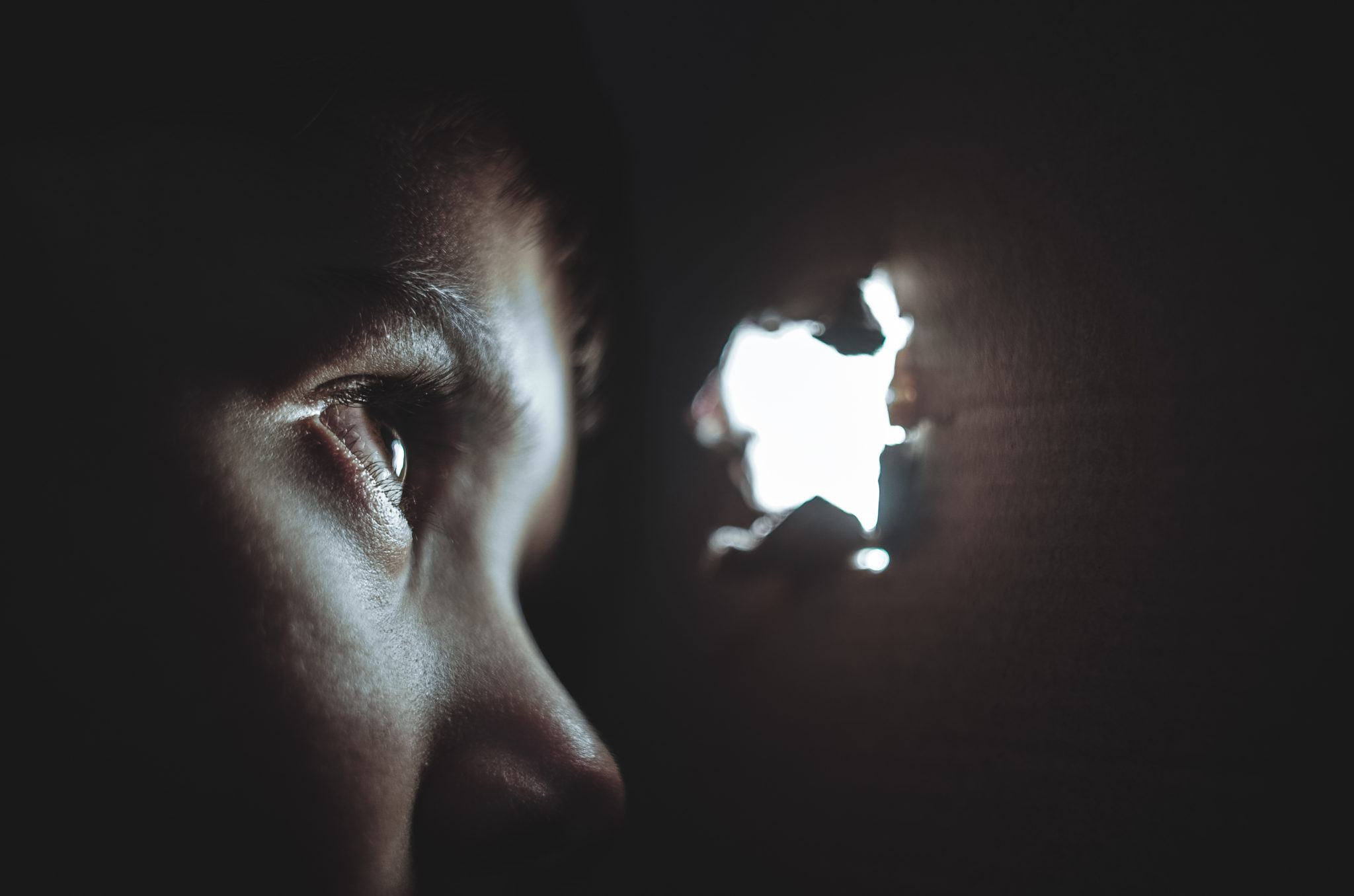 You're more likely to be found by animals interested in your food than anything else. Hang everything food-wise, including all pots and utensils that have touched food.

Then you can sleep knowing that no animals will be interested in the smell of your camp as it's just an unwashed cyclist.

Additionally, be careful when cooking any food on a stove. The smells will give you away and attract hungry wildlife.

Don't camp within sight or sound of any houses, even if they appear deserted. Free-running dogs often protect rural houses or farms. If you can hear them, they can hear your camp.

Best to look out for animal tracks in general, and to avoid sleeping in those locations.

For added piece of mind consider a hammock for alternative sleeping. It's even less likely to be visited by an animal as it's off the ground.

Click here for a great alternative sleeping option while on a cycle tour.

Make sure you spray yourself with insect repellent so that mosquitos can't find you.

Check out some poisonous plants before you set off on your trip, so that if you do stumble across some, you don't accidentally start rolling around in them.

There's nothing worse than being mistaken for a deer and shot. Make sure not to stealth camp during hunting seasons.

If you find yourself in the woods at dawn with gunshots, it might be best to hang tight for a couple of hours.

If you have to move, make sure you wear bright colors, preferably "hunter orange," and act as little like a deer as possible.

If you set up your tent and see a lot of s﻿﻿hotgun shells and broken bottles, don't camp there.

Choosing earthy colors for your gear, that'll blend in with the background is helpful when you buy. Greens, blacks, browns, and grays work well.

Related Post  How To Make A Frame Bag: Feeling Creative?

Consider your panniers as well. Bright yellow is ideal for the road visibility, but they'll stand out when camping.

Make sure you hide them away as soon as you start to set up camp.

For added stealthy-ness carry a piece of hessian or burlap to drape over your laid down bicycle.

Camouflage could also be used to cover up your bike's reflectors, reflective portions of your panniers and other gear.

Be careful of using flashlights at night. If a light is necessary, consider using a red, instead of white light.

A red light doesn't mess up your night vision as much, and can be a less conspicuous.

Don't make a fire. The smoke or light may give you away. Worse, you may start a grass or forest fire, especially in times of drought.

Choose a site as near to sunset as possible. The longer your campsite is exposed to daylight, the more chance there is for someone to see you or stumble upon your camp.

However, avoid setting up in the dark as any headlights you use could give you up.

Get on the road as early as possible, preferably at first light. If you buy breakfast in a nearby town, you're adding sales taxes to the local coffers.

That can be your hotel rent for the night. 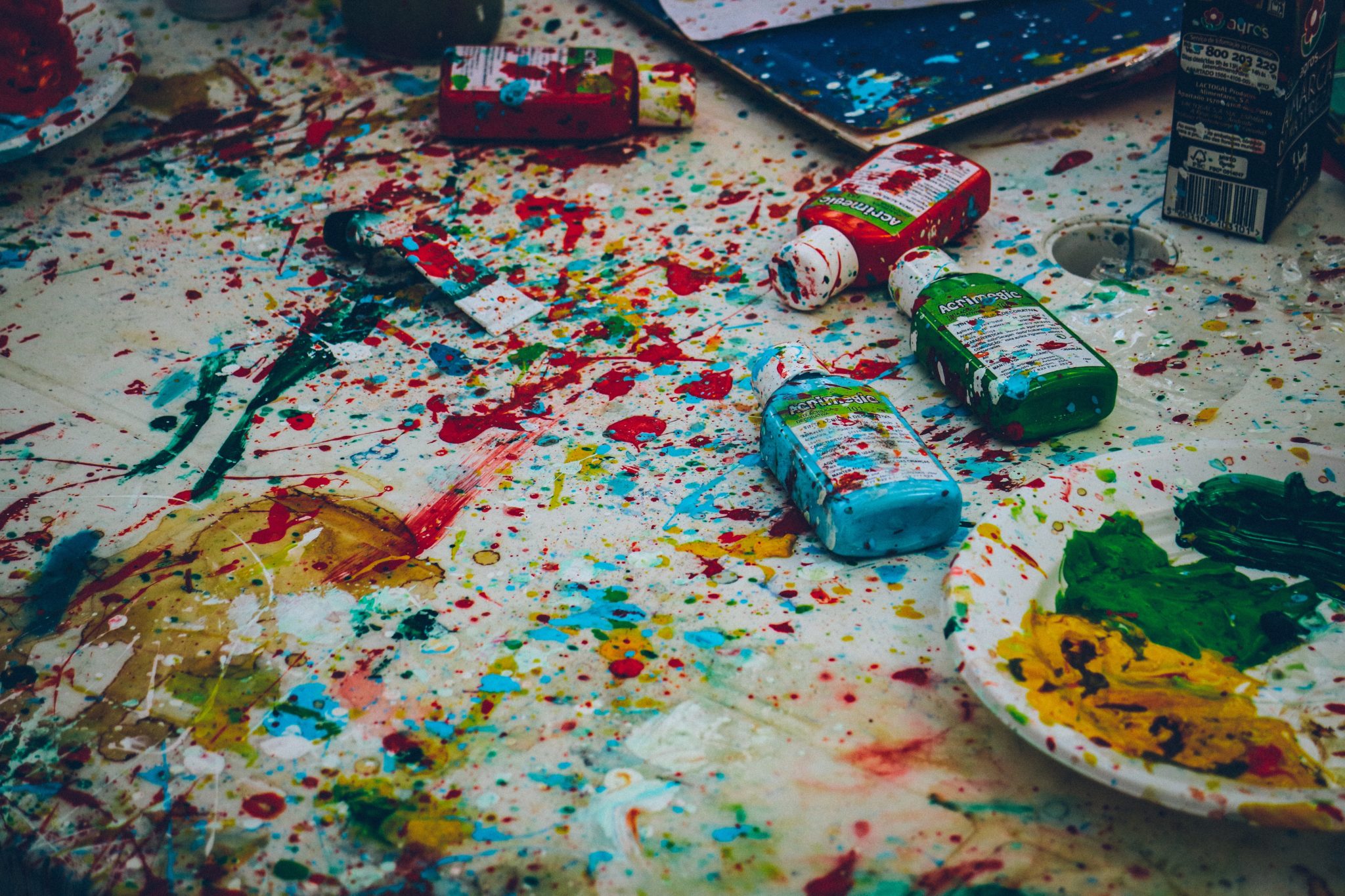 This is an area I'm sure everyone reading will already know, but:

Don't leave any food or rubbish.

Don't cut down trees for shelter or fire.

Don't disturb or damage any property, livestock or field crops you encounter.

I guess, just put everything back how you found it. 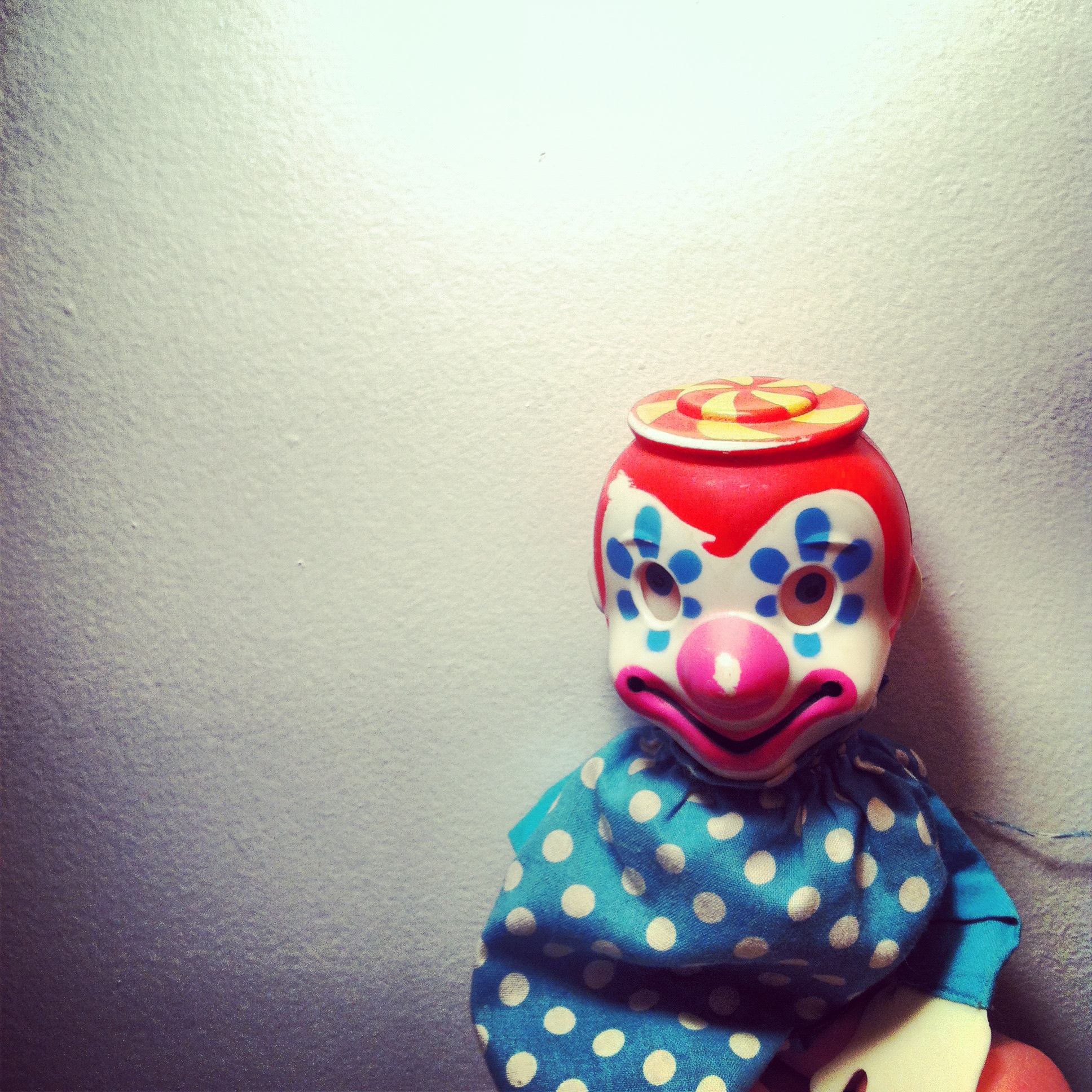 Honestly, this is something that I struggled a lot with when stealth camping. For some reason, it feels like everything is out to kill me past 10 pm.

It does get easier over time but here're a few tips to get you started.

Wear some earplugs. Sounds are amplified at night, and they make an active imagination work overtime.

Small insects sound like large animals, and even the wind can cause the trees to talk.

Take a swig (or two... or three) of a drink of your choice, but be careful not to go overboard in case you're asked to move and are unable to!

For complete piece of mind, you could wear a lanyard with a whistle and a pepper spray attached.

You'd almost certainly not need to use it, but it can help you drift off knowing that you could protect yourself if you needed to. 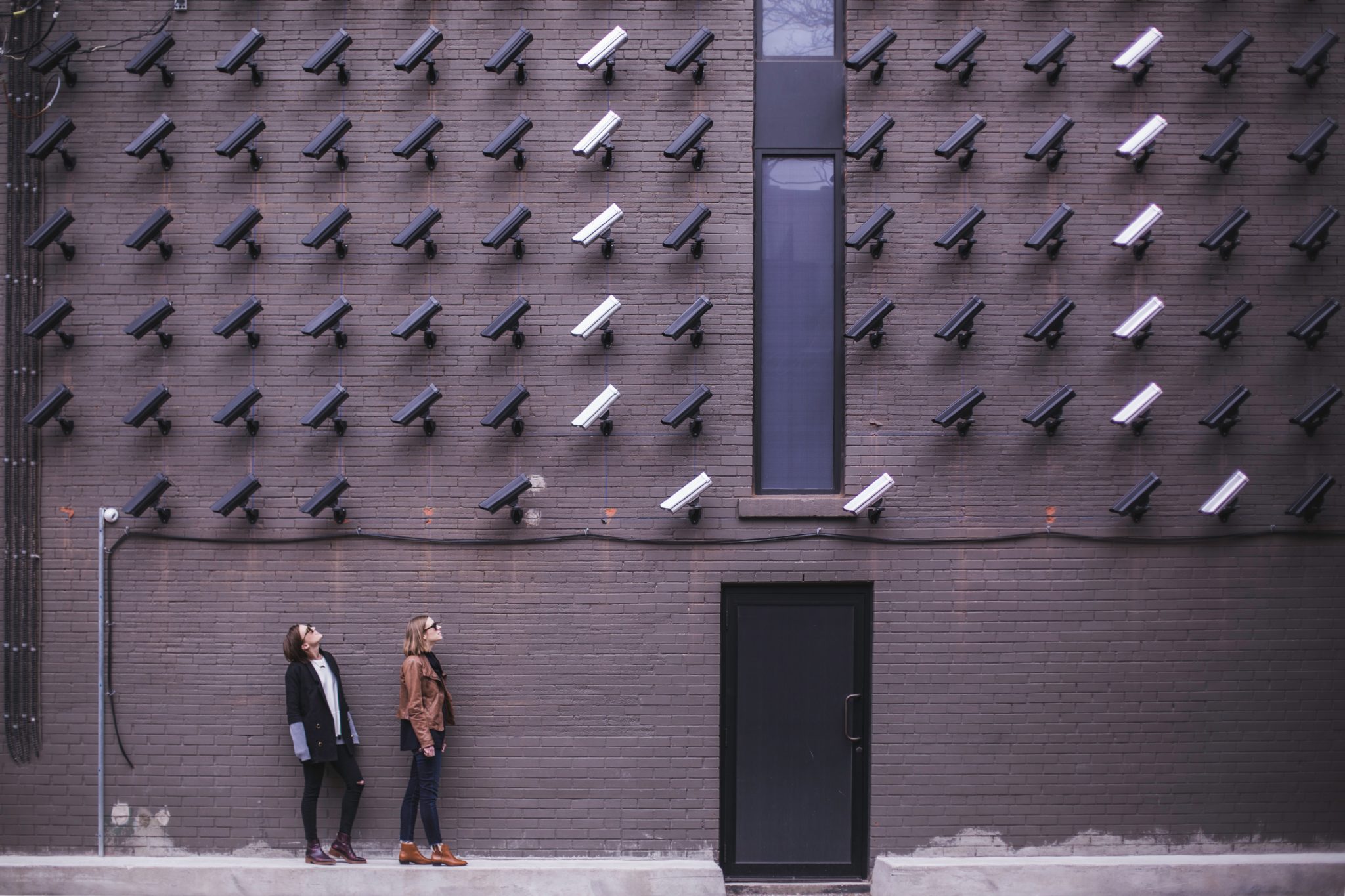 On my trips, I either lock the bike to a gate or to itself, or I make sure it's touching the tent in some way.

One tip is to attach your tent to the bike strategically. No one trying to nick your bike in the dark will notice that moving the bike is going to rustle the tent.

A rustling tent would probably wake you and scare them off.

Additionally, you can now buy bike locks that double up as alarm systems. For a great article on general bike security on a cycle tour click here.

I think the best tip is to camp in a place where no-one knows your there. If no-one knows, you're safe. 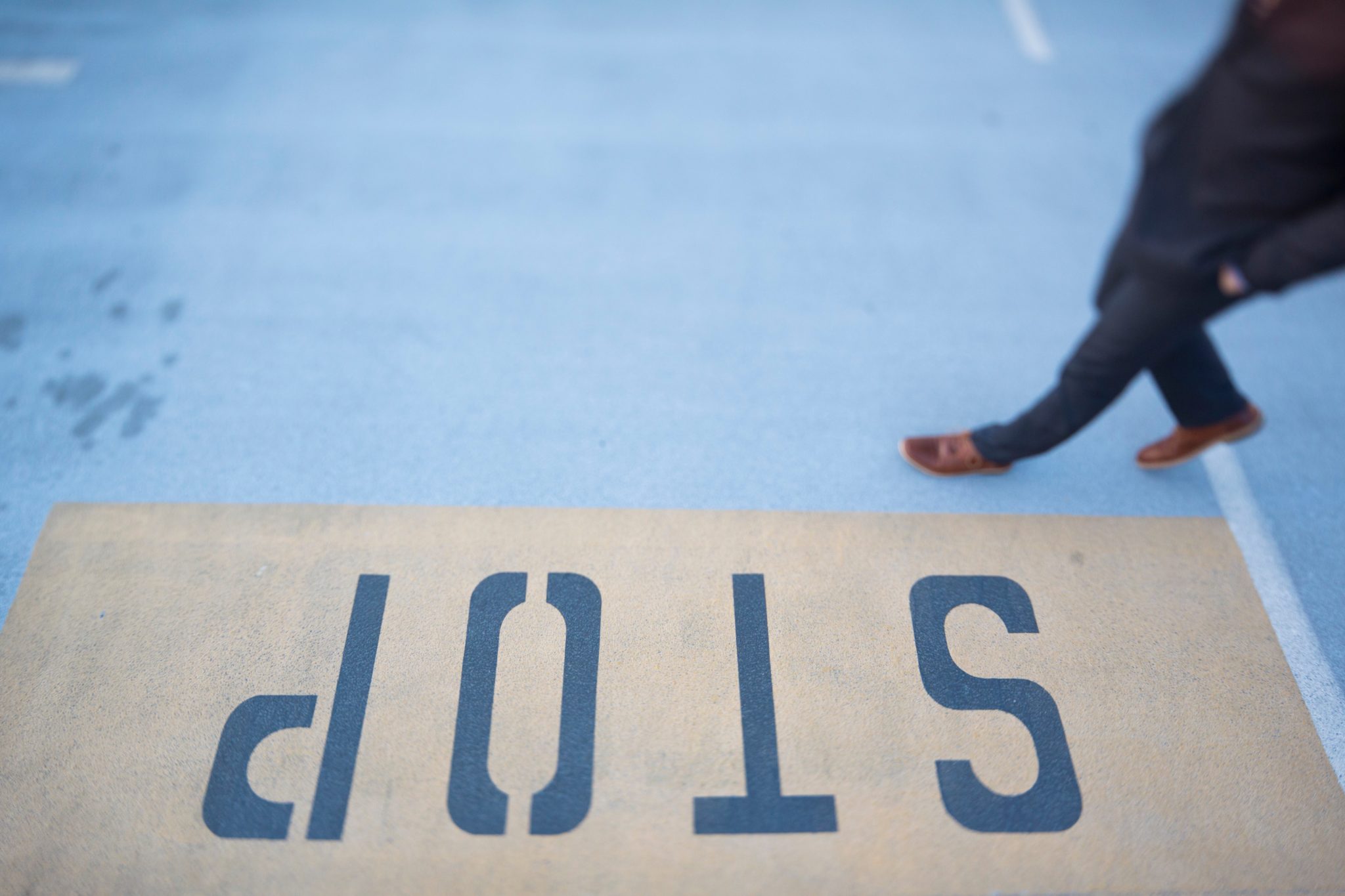 Each country treats free camping differently. In the Nordic countries of Finland, Iceland, Norway, and Sweden, as well as the Baltic countries of Estonia, Latvia, and Lithuania, they have “everyman's right."

This law allows you to camp almost anywhere. 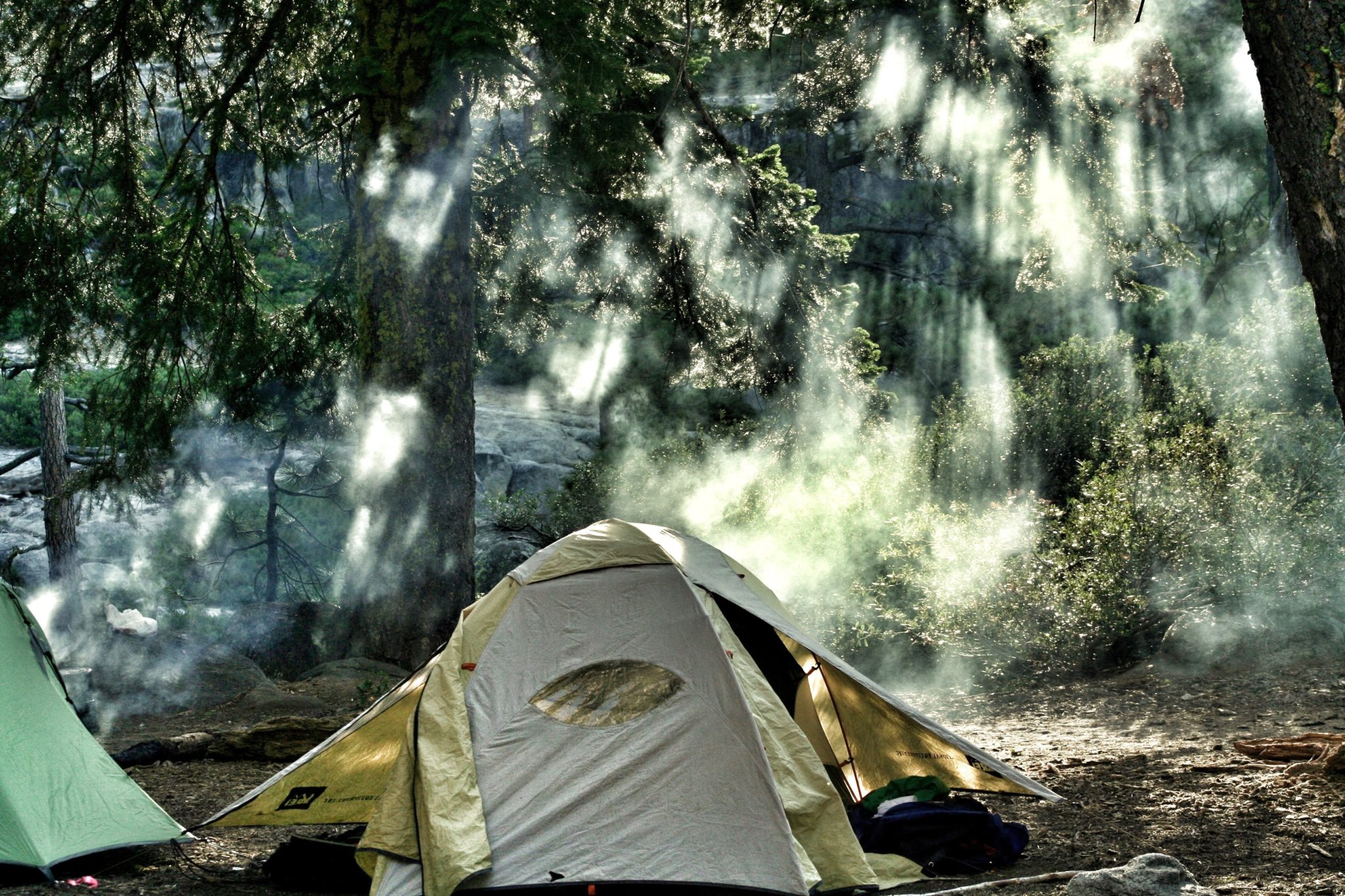 You can often find some really free camping spots by doing a simple google search.

If the google search brings up a blank you can always use Maps.me, which is perfect for touring cyclists.

You can download incredibly detailed maps of anywhere in the world, and use them offline. Just search for any grassy looking area, and you're on to a winner.

Although not technically camping. Th WarmShowers community is a free worldwide hospitality exchange for touring cyclists.

It's a great way to meet like-minded people and something I highly recommend.

There is of course also Couchsurfing. The concept is the same as Warmshowers but not specific to cyclists.

If someone does find your tent, have a sign near it saying something like "Cycling around the world, Uk to Australia!"  This way, at least people know why you're there.

Ok, I think that's everything! Although I'm sure, you can think of some other stuff! If you've got additional ideas, then be sure to put them down in the comment section below.

I look forward to hearing from you.